Celebrating the Ninth of July

Yesterday was Independence Day in the U.S., but the Fourth of July is not one of my favorite holidays. For various reasons. But partly because the original Declaration of Independence, which was ratified on July 4, 1776, was the declaration of the independence (from British rule) primarily for white males in the Colonies.

While the words “all men are created equal” in the Preamble were later greatly emphasized by the abolitionists, slaves were certainly not considered equal to their white owners in 1776.

And while some might argue that “men” was a generic term, and not gender specific, women in fact were not given the right to vote until 144 years later!

Thus, rather than celebrating July 4, I suggest that it would perhaps be more appropriate for the people of this country to celebrate July 9. Why? Because the Fourteenth Amendment to the U.S. Constitution was ratified on that day in 1868. 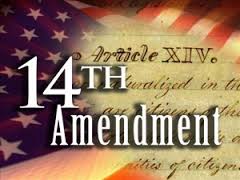 In fact, it was not until I was in Little Rock in January 2011 and saw words of the Fourteenth Amendment emblazoned on the wall of the Little Rock Central High School National Historic Site Visitor Center that I began to grasp the significance of that constitutional amendment.

On the Fourth of July many USAmericans pledge allegiance to the flag, which, by the way, was not written until 1892 and has been recited in its present version only since 1954. As you all know, that pledge closes with the words “with liberty and justice for all.”

But that was hardly the reality for many people in the U.S. for long, long after July 4, 1776. The Fourteenth Amendment greatly contributed toward making those words ring true.

And it is common to hear “The Star Spangled Banner,” the national anthem, sung on the Fourth of July. Even though we usually hear only the first verse sung, all four verses end with the words “the land of the free and the home of the brave.”

But for decades after July 4, 1776, large numbers of people in the new nation were not free. But the Fourteenth Amendment helped to rectify that situation.

Section 1 of the Fourteenth Amendment includes these significant words:

No State shall make or enforce any law which shall abridge the privileges or immunities of citizens of the United States; nor shall any State deprive any person of life, liberty, or property, without due process of law; nor deny to any person within its jurisdiction the equal protection of the laws.

Those are the words that led to the historic Brown v. Board of Education Supreme Court decision in May 1954 and, consequently, to the integration of Central High School in Little Rock (and other schools) in 1957.

Ninety years earlier, in January 1867, Kansas became the ninth state to ratify the 14th Amendment, and Missouri did so just two weeks later. Then when South Carolina ratified it on July 9, 1868, that meant that 2/3 of the states had done so. The amendment, therefore, became a part of the Constitution.

Yes, we USAmericans have, and will, celebrate the Fourth of July this week, as we should. But even though it is not a national holiday, let’s also celebrate the Ninth of July and commemorate the ratification of the highly significant Fourteenth Amendment.

Note: This blog posting and more than 300 previous ones can be found at http://theviewfromthisseat.blogspot.com

* Born in Grant City, MO, on 8/15/1938 * Graduated from Southwest Baptist College (Bolivar, MO) in 1957 (A.A.) * Graduated from William Jewell College (Liberty, MO) in 1959 (A.B.) * Graduated from The Southern Baptist Theological Seminary (Louisville, KY) in 1962 (B.D., equivalent of M.Div.) * Received the Doctor of Philosophy degree in theology from SBTS. * Baptist missionary to Japan from 1966 to 2004. * Full-time faculty member at Seinan Gakuin University (Fukuoka, Japan) from 1968 to 2004. * Adjunct professor at Rockhurst University from 2006 to 2014.
View all posts by Leroy Seat →
This entry was posted in Regular Post and tagged Fourteenth Amendment, Fourth of July. Bookmark the permalink.